a nonpartisan, nonprofit organization of common people—urban and rural, spiritual and secular—seeking equal protection for all, united against hate, bigotry and racism.

outreach and intervention in communities to promote understanding, healing, reconciliation and redemption. Instead of simply condemning the latest eruptions of hate-inspired violence, we dig down to the root causes of division, fear and hate. And we advocate policies creating greater economic security, promoting religious tolerance, celebrating differences and honoring America’s heritage of openness to foreigners. 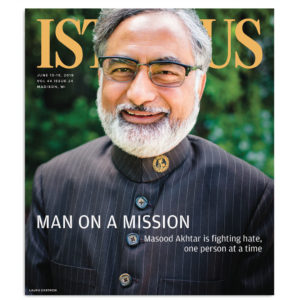 We Are Many-United Against Hate was started by Masood Akhtar, a Muslim American businessman from India who was alarmed by a proposal to establish a Muslim registry in the U.S.

We Are Many-United Against Hate’s efforts are being recognized nationally. In May 2019 the FBI’s national director gave Masood the agency’s Community Leadership Award. The Southern Poverty Law Center also saluted Masood’s work with a Certificate of Appreciation for his contributions to the ongoing fight against hatred and intolerance in America. His name was added to the Wall of Tolerance in Montgomery, Alabama to provide inspiration to all those who choose to take a stand against hatred. 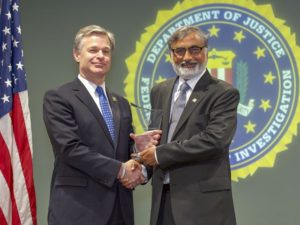 What makes We Are Many-United Against Hate unique and special is its commitment to community engagement, even to one-on-one counseling and mentoring to help people work through prejudices and see our common humanity. It’s about overpowering hate…one act of common decency at a time.

When students in Baraboo, Wisconsin were photographed making a Nazi salute, many condemned the community. We Are Many-United Against Hate went to Baraboo, reaching out to local leaders to organize a community-wide response.

Two leaders of We Are Many-United Against Hate—one a former white supremacist and the other an ex-police officer whose father was killed in the mass shooting at the Sikh temple in Oak Creek—made presentations in the schools and at community forums about how they overcame differences, found common ground and forged a close friendship. 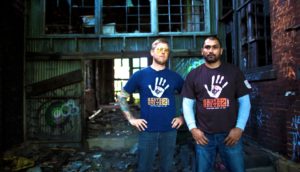 The story of their journey to forgiveness and eventually brotherhood opens eyes and captures hearts. As one Baraboo teacher put it: “I can feel the healing beginning with our students and community.”

By making a tax-deductible gift to We Are Many-United Against Hate you are helping to provide sustaining support to our mission of outreach, community engagement, education and advocacy that can stop hate dead in its tracks.

Contact us to request a speaker or hold an event in your community:

Want to take your support to the next level?

Emphasize your commitment to combating hate and injustice by making a donation to help support and sustain our efforts in the community now and into the future.

Americans need to pledge today to work together in a non-partisan way to make sure that January 6 never happens again in this country.  United Against Hate had a message on January 6, 2022 in an organized event at the McFarland High School auditorium in Wisconsin.  Please see the events page for more information and …

END_OF_DOCUMENT_TOKEN_TO_BE_REPLACED

The number of reported hate crimes in Wisconsin grew by 54 percent in 2021, according to new data from the FBI. The increase comes even as fewer law enforcement agencies reported data to the federal government. Read the article here>

The FBI recently released its annual hate crime data, showing hate crimes are declining. Advocacy groups and criminologists, however, say the numbers are inaccurate and hate crime reports are higher than ever. Wisconsin Public Radio speaks with criminal justice professor, Dr. Brian Levin, on what the numbers mean. Listen to the program>